If this latest proposal from the US becomes policy, it could be a major watershed point for the globalized police state, allowing governments to not only to profile you, but also to target and evenexclude individuals based on their online speech and activity.

This week we learned that US border control have been running a shadow ‘test’ program behind the scenes, where travelers into the US are asked to declare their ‘online presence’, including any social media accounts and associated blogs.

The US Federal Register states, “Collecting social media data will enhance the existing investigative process and provide Department of Homeland Security (DHS) greater clarity and visibility to possible nefarious activity and connections by providing an additional tool set which analysts and investigators may use to better analyze and investigate the case.”

In the hive mind of the state, the term nefarious is proven to be a flexible one, and could encompass persons of any political or intellectual persuasion who travel internationally. Where does it end?

So who are these arbiters of political thought and social discourse?

According to this recent report by The Guardian, the ‘deciders’ are likely to be hourly wage earners working for the TSA, or contractors working under the banner of the Department of Homeland Security (DHS). Initially, these workers would be tasked with analyzing your ‘online presence’:

“US Customs and Border Protection’s proposed change would add a line on both the online and paper forms of the visa application form that visitors to the US must fill out if they do not have a visa and are planning on staying for up to 90 days.

The following question would be added to both the Electronic System for Travel Authorization (Esta) and I-94W forms: “Please enter information associated with your online presence—Provider/Platform—Social media identifier.”

Thus far, the DHS claim they are only running a limited “pilot program”, one which the agency is keeping confidential and out of the public eye. Officials claim that the secrecy surrounding this controversial program is because they don’t want to reveal their methods for identifying a potential “terror threat.” Millions of visitors disembark in US each week (Photo: Flickr user Tom May via Fast Company)

In practical terms, with 10 million visa applications and over 77 million visitors annually – what we are really seeing here is a giant ‘big data’ capturing exercise that will quickly generate an additional column on your personal database – sitting alongside your standard personal, facial recognition and other biometric ID information, as well as your travel history, and anchored by the RFID chip already embedded in most international passports.

How the DHS expects its border control staff to properly vet and verify the information in question before a traveler passes through border security is hard to ascertain. The potential for misinformation is ever present.

Eventually, processing this amount of data will probably be farmed out to high speed intelligent, or A.I. computer systems. Similar high-end, algorithm-based analytical surveillance programs like PRISM is already being used by US and UK government agencies to trawl through masses of public online activity, so it only stands to reason that A.I. will eventually perform the job of flagging-up any undesirables.

If you went by the US media rhetoric you’d think that Facebook and Twitter were the number one causes of global terrorism. No surprise then, that the battle cry for this latest DHS program has to be last December’s apparent ‘ISIS-inspired terrorist event’ in San Bernardino, and the subsequent controversy over the FBI’s ability access to one of the suspect’s encrypted iPhone 5C.

What’s more likely to be driving this grand security directive is not necessarily some effective plan to “keep people safe”, but rather, highly lucrative commercial interests. 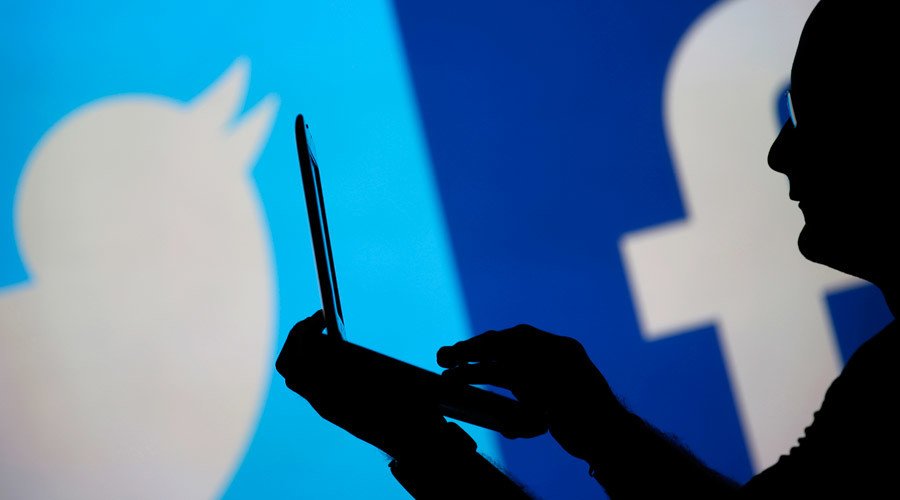 Perhaps the most troubling aspect of this story has to do with assessing the relationship between the individual and the government and the expectation of privacy in a so-called democratic or ‘free’ society.

In this instance, the government is adopting a blanket policy of judging a person as “guilty until proven innocent.” By ceding this expectation to the government, an individual consenting to this arrangement by forgoing his or her right to privacy and due process. As history shows us time and time again, once you give this away, it’s very difficult to get back.

In a BBC interview this week, Joseph Lorenzo Hall, chief technologist at the Centre for Democracy and Technology points out one of the fundamental flaws in the government’s new regime, as he explains:

“It’s very hard to see travellers not filling out this item – even though it’s optional – as they may fear not getting entry into the country.”

“We would have a poor society if people were chilled from participating in social activity online so I really hope they rethink this.”

Now many Americans might look at this story and think, “This doesn’t affect me, it’s only for foreigners.” While that may seem true on the surface, the reality is that this DHS system is designed for Americans too. Consider it phase one. Besides this, do not be surprised if whatever rights you deny your neighbor, will eventually be denied of you too.

This is what technocracy looks like – it’s brutal, unforgiving, and ultimately unresponsive to common sense and reason. Worst of all, it pretends to be driven by a perceived public interest in safety and security, but in reality the only security that’s ever achieved through such measures – are secure profits for a select number of corporate firms fortunate enough to win corporate contracts in the ever-expanding security theatre that is Homeland Security.